Home » Blog » Feast of the Annunciation: Why is this day important for Christians?

Feast of the Annunciation: Why is this day important for Christians?

Many Christian factions religiously celebrate the Feast of the Annunciation. However, it is more common amid Lutheran, Anglican, Orthodox, and Catholic churches. The feast is one of the nine grandest feasts of the Lord in Orthodox Christianity.

History of the Feast

The annunciation feast day was celebrated as early as the fourth or fifth century for the first time. However, the first time there was a mention of this feast was in Constantinople in 656 AC. It is said that the feast was commemorated throughout the church in Toledo.

The Roman Catholic Church celebrates the feast on March 25 every year except when the day falls on Holy Saturday, Good Friday, or Maundy Thursday. If the feast falls on any of these days, it is observed on the most appropriate day during Easterside.

On the other hand, the day remains the same in Eastern Catholicism and Eastern Orthodoxy, even when it falls during Easter. If the Feast of the Annunciation and Easter fall on the same day, it is called Kyriopascha.

According to the Holy Bible, the angel Gabriel came to the earth to meet the Virgin Mary in Nazareth, Galilee. At that time, Mary was betrothed to a person called Joseph. The angel hailed Mary and asked her not to be afraid as she had found grace with the Lord. Gabriel told Mary that she would be the mother of the Son of God.

Mary responded that she was a virgin, but the angel assured her that the Holy Ghost would come upon her. The angel also told Mary that Elizabeth, her barren cousin, would also conceive a son, though she was old. Mary replied, “Be it done to me according to thy word.” Later on, Joseph also got an annunciation.

Why is the Feast of the Annunciation So Important?

The feast is a crucial day for Christians all over the world. Annunciation feast day falls precisely nine months before December 25 every year to celebrate the birth of Christ. The day is significant as it celebrates the appearance of the angel Gabriel before Mary to inform her that she will give birth to the Son of God.

It is easy to appreciate the importance of this feast on Western culture from the fact that people initially used to celebrate New Year’s Day on March 25 every year. The tradition of celebrating New Year’s Day continued till the mid-18th century.

According to Christian doctrines and beliefs, Christ was born of the Virgin Mary and conceived by the Holy Spirit. He performed countless miracles, was the founder of the Church, and sacrificed his life through crucifixion to receive atonement for sin. People also believe that Christ rose from the dead before ascending to Heaven.

We at The Salvation Garden believe and appreciate that praying is an integral part of every feast. Are you keen to send a prayer for the feast of the annunciation to the Holy Land without visiting the place? Relax, as we would personally go to your preferred holy site to deliver your prayer of the annunciation.

You have to simply fill out the online form and choose a church from the list of holy sites in Jerusalem and we will do the rest. Although our unique service comes free of cost, your donation can assist us with our printing, security, and travel expenses. 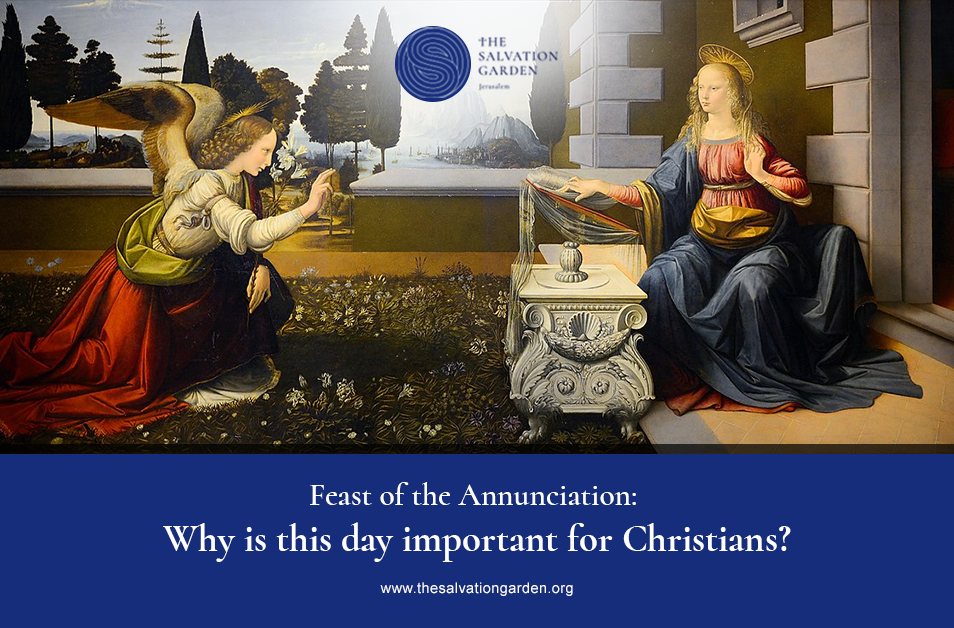 Special prayer at Nazareth, where Jesus grew up and preached, on time to be given as a blissful Christmas gift.

Special prayer at Nazareth, plus a video of the prayer read where Jesus grew up, to be given as a Christmas gift.